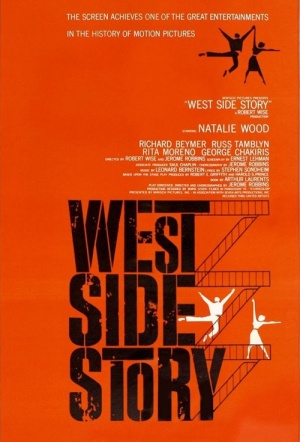 1961 musical, big-screen adaptation of the hit Broadway show which transplants the classic tale of Romeo and Juliet to New York City in the 50s.

The two feuding families are replaced by brawling street gangs. The Montagues become the Anglo Jets, led by Riff (Russ Tamblyn), and the Capulets become the Puerto Rican Sharks, led by Bernardo (George Chakiris). At a dance, Tony (Richard Beymer), former leader of the Jets and Riff's best friend, and Maria (Natalie Wood), Bernardo's little sister, see each other across the room and it's love at first sight. With opposition from both sides, they meet secretly and their love grows deeper. However, the gangs are plotting one last rumble, a fight to take control of the streets, and one that threatens Tony & Maria's romance.

A beautifully-mounted, impressive, emotion-ridden and violent musical which, in its stark approach to a raging social problem and realism of unfoldment, may set a pattern for future musical presentations...

Not seen it? Time you did.

Reconstructs its fine material into nothing short of a cinema masterpiece.

The Warriors as pre-imagined by Gene Kelly, this really is the musical for people who don’t like musicals...

It's the groundbreaking combination of toe-tapping tunes and wailing pathos, which makes this a truly arresting musical. Even thorny social issues inspire song-and-dance routines like a memorable performance of America by the Puerto Ricans...