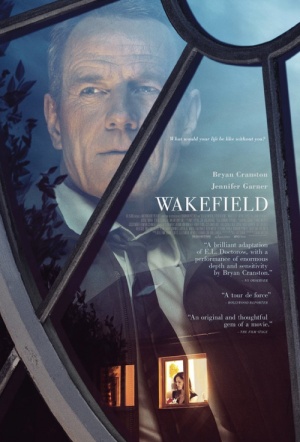 Bryan Cranston has a nervous breakdown that causes him to leave his wife and live in his attic in this drama co-starring Jennifer Garner.

"For Howard Wakefield (Cranston), New York City lawyer, husband, and father of two, the overwhelming impulse to just leave arises one night as he stands in his own suburban driveway. Howard, however, does not run far. Inspired (or led?) by a raccoon, he enters the attic of his two-car garage, and proceeds to hide there for weeks. He spends hours every day observing his wife, Diana (Garner), and the consequences of his disappearance, taking advantage of his family's daytime absence to shower and raid the fridge. Eventually, Howard begins to prowl the town streets at night in search of food and space. Disheveled and unrecognisable, he revels in his freedom while never losing his visual and emotional ties to his family. But, prompted by the re-entry of an old flame into his wife's life, Howard realises that it may not be easy to go home again, as his flight will seem as inexplicable and inexcusable to his wife as it seemed completely necessary to him." (Toronto International Film Festival)

Unfortunately his [Cranstons's] commitment isn’t enough to sell Wakefield as anything more than a hollow character study, with an unappealing tool at its core.

Robin Swicord has crafted an elegant, slightly spiky rumination about a universal daydream: chucking a conventional life and starting fresh.

It would have been asking a lot from any actor to carry this film, and Cranston has done the heavy lifting and more.