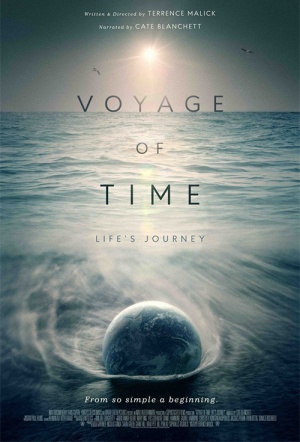 In his debut documentary, Oscar-nominated director Terrence Malick (Tree of Life) explores the life and death of the known universe.

"The wildly ambitious Voyage of Time: Life's Journey is every bit as epic as its name implies: Malick leads us on a temporal trip through the history of the universe. After witnessing the birth of stars and the evolution of life on Earth, we pause to wonder at the sun and planets before plunging into the inky depths of the oceans, where incandescent creatures float in the darkness. Featuring soulful narration by Cate Blanchett, the film brings a contemplative and speculative tone to the grandeur of its subject; it sprawls across the screen with glorious images both real and fabricated, both earthbound and celestial." (Toronto International Film Festival)

Making a film that has the contemporary aspect of a planetarium show is, in its way, a deeply cool and populist thing to do, and "Voyage of Time" is likely to connect with audiences...

Somehow we're never truly surprised by any of its wonders.

It's an experience that I haven't been able to shake, like a waking dream.

Voyage of Time is perhaps best appreciated as an abstract, with its sheer profusion of natural beauty and consequent synchronicities of image.

Gorgeous imagery pondering our existence can only sustain so much of a film's runtime when the thematic undercurrent is this simple. Even the most devoted Malick fan may find himself or herself bored to tears by Voyage of Time: Life's Journey.