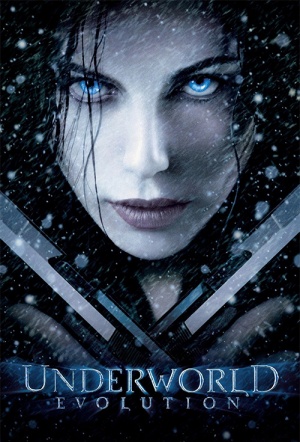 Selene (Kate Beckinsale) and Michael (Scott Speedman) seek the origin of the rift between their races in the second entry in the Underworld series.

Seductive vampire Selene and renegade werewolf Michael love one another, but find themselves abhorred by the members of their own clans. Seeking clues that might provide a key to healing the rift between their species, they are hounded by Marcus (Tony Curran), an ancient creature obsessed with perpetuating the war between them. Continually beset by enemies from both sides, the lovers explore their pasts as they seek their destiny.

Pic should please a fan base that has grown during original's international theatrical and homevid roll-out.

I can't even begin to divulge the storyline because it's mostly unfathomable.

With leads who strain to manage one facial expression between them, and a cinematographer shooting everything through the same steel-blue filter, Underworld: Evolution is a monotonous barrage of computer-generated fur and fangs.

The digital critters look much better than in the first film, it's fun seeing Derek Jacobi and Bill Nighy vamp it up, and the sight of Kate in that suit makes it worth squinting through all the murk.

Evolution's action sequences are as horribly bungled as its plot, resulting in a string of repetitive confrontations that feel toothless even by the last movie's standards.