'Underworld' seems to be an entire film franchise built around the premise that series creator Len Wiseman's wife, Kate Beckinsale, looks amazing clad head-to-toe in skin-tight rubber. The story and dialogue are almost as plasticine-looking as the "lycans " (that's werewolves to the un-Underworld-initiated) that don't look nearly as convincing as Ray Harryhausen stop-motion clay figures. Anyway, if this sort of mindless, sexist, formulaic movie floats your boat and if you love 'Underworld' movies, then this, like all those 'Resident Evil' movies, is the same old same old. For teenage hetrosexual boys this may well be heaven, but for those seeking a bit more - well, there's always the sight of Kate Beckinsale clad head-to-toe in skin-tight rubber to take your mind off the by-the-numbers popcorn action set-pieces that anyone who's seen 'The Matrix' has already seen... Oh, and in 3D? Well, unlike Scorcese's 'Hugo' which utilised the technology to bring added depth behind the screen, this resorts to the usual 1950's schlock-horror 3D tactic of hurling things towards the audience - none of which are very interesting, unless of course you count Kate Beckinsale, who looks amazing in 3D clad head-to-toe in skin-tight rubber. But then Kate looks amazing in any dimension... Two stars for mindless popcorn munching fun... and Kate's continuing S&M dominatrix wardrobe selection. 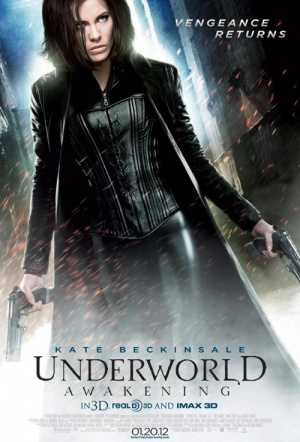