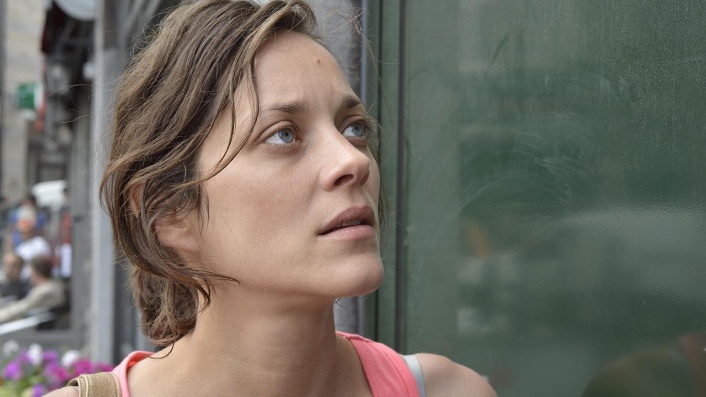 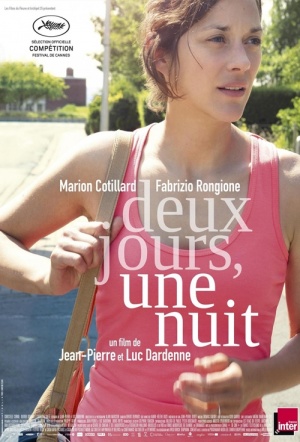 French working-class drama nominated for the Palme d'Or at Cannes 2014, starring Oscar-winner Marion Cotillard as a young woman who will lose her job unless she convinces her colleagues to give up their bonuses. Directed by two-time Palme d'Or winners, the Dardenne brothers (The Kid with a Bike, L’enfant).

"Cotillard is wonderful as Sandra, a woman in a precarious position. Her employer at a solar-panel factory has given her colleagues a stark choice - they must choose to either receive a bonus or have Sandra return to work after a leave of absence. An initial ballot is not promising for her. The employer agrees to another vote, leaving Sandra one weekend to convince the majority of her colleagues to sacrifice their bonuses so she can keep her job. With the help of her husband Manu (Dardenne brothers regular Fabrizio Rongione), Sandra visits her colleagues one by one to make her case." (Sydney Film Festival)

The Cannes Film Festival loves the Dardenne brothers and their brand of reality-sharpened drama, though that love is not always shared amongst us “regular” movie-lovers (don’t get me started on The Kid with a Bike). But with the superhuman acting powers of Marion Cotillard, Jean-Pierre and Luc Dardenne have cast a wider net of appeal, crafting a working-class tale that’s as straightforward as a fired bullet with an exit wound the size of a grapefruit.

The Dardenne brothers take on a movie star and lose none of their beautifully observed verisimilitude in another powerhouse slice of working-class Belgian life.

It draws us into the debate, makes us complicit, demands that we have an opinion, and then upends that same opinion a few minutes later. It's engaging and rousing.

Nothing all that new, perhaps, but thoughtful, humane and superbly composed...

A tense dramatic situation and a subtly magnificent central performance from Marion Cotillard add up to an outstanding new movie from the Dardenne brothers.

A powerful, finely scripted issue movie, made all the more incisive by Marion Cotillard's raw performance as a woman fighting to save her job while suffering from depression.

Specialists in unvarnished intimacy, the Dardenne brothers add another clear-eyed contemplation of stark social reality to their impressive output.

It's a rare film of unforced simplicity that will stick with you for a long time. And it's honest right to its perfectly judged ending.