Tucker and Dale vs Evil 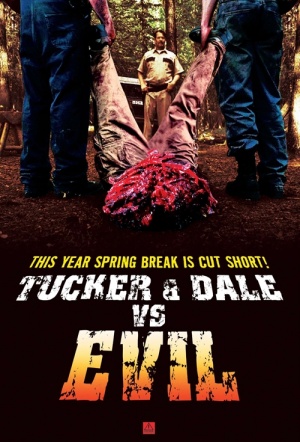 Canadian, hillbilly horror-comedy. Tucker and Dale, two hillbillies heading to their 'fixer-upper' cabin for some relaxin', discover they ain't alone in them woods. They encounter an SUV full of vacationing college kids, and Dale unintentionally creeps them out. But later, as he and Tucker are fishing, Dale rescues one of them (the pretty blond Alison) after she falls into the lake. Assuming she’s been captured, the indomitably preppy college kids rally to find her. A comically macabre battle between Izods and overalls, Eli Craig’s ingenious send-up of the horror genre recounts a simple misunderstanding gone grotesquely wrong. Our hillbilly psycho killers are actually sweet as pie; it’s the judgmental college kids who have 'issues'.(Source: Sundance Film Festival 2010)

Tucker and Dale vs Evil / Trailers