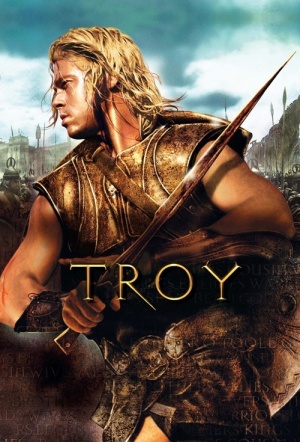 When Paris steals Helen away from her husband, King Menelaus (Gleeson), war is declared on Troy. Under the guise of familial pride, Menelaus' brother Agamemnon (Cox), King of the Mycenaeans, unites all the massive tribes of Greece to steal Helen back from Troy in defence of his brother’s honour - in reality he wishes to conquer the Aegean for his own empire.

The walled city of Troy, under the leadership of King Priam (O'Toole) and defended by Prince Hector (Bana), is a citadel that no army has ever been able to breach. One man alone stands as the key to victory or defeat over Troy - the demi-god Achilles (Pitt), believed to be the greatest warrior alive. Achilles' nymph mother prophesises his name will be immortalised for all of history if he agrees to fight for Menelaus. His decision to assist the Greeks will ultimately decide the outcome of the war, but his love for his prisoner Briseis (Byrne) could change his mind.

Despite a sensationally attractive cast and an array of well-staged combat scenes presented on a vast scale, Wolfgang Petersen’s highly telescoped rendition of the Trojan War lurches ahead in fits and starts.

A creaky set-up denies Troy much emotional resonance, but jaws will sag once it hits its stride.

Bruising battles and some stirring performances make Troy enjoyable, if rather long.