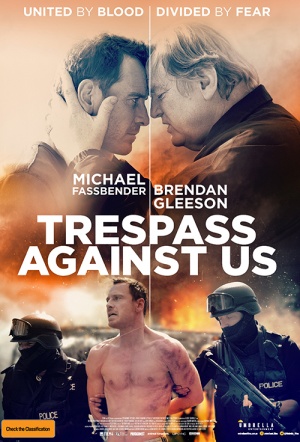 Chad Cutler (Fassbender) is heir apparent to his bruising criminal father, Colby (Gleeson) and has been groomed to spend his life hunting, thieving and tormenting the police. But with his own son Tyson (Georgie Smith) coming of age, Chad soon finds himself locked in a battle with his father for the future of his young family.

When Colby learns of Chad’s designs for another life, he sets out to tie his son and grandson into the archaic order that has bound the Cutler family for generations. He engineers a spectacular piece of criminal business involving a heist, a high-speed car chase and a manhunt, which leaves Chad bruised and bloodied and with his very freedom at stake. With the law cracking down and his father tightening his grip, Chad is forced into increasingly desperate measures.

Trespass Against Us / Reviews

Adam Smith’s first feature, (following his work as a director on Chemical Brothers videos and TV’s Dr Who), is no whizz-bang Brit gangster flick. Rather, the rewards are in the carefully-constructed cinematography and top-notch performances, not just from the two leads, but also child actors and a supporting cast who blend seamlessly into the unforgiving environment on display.

As a thief trying to break away from his criminal father, Michael Fassbender can't act his way out of this pile of grungy nonsense.

Though thematically vague, thinly plotted and without a reliably sympathetic soul to cling to, the movie has a mutinous energy and an absurd, knockabout charm; even its violence is more quirky than brutal.

Moments of excitement don't make up for what is ultimately a slow burn study of characters that aren't nearly as interesting as the movie thinks they are.

Some smart, deft writing, and a series of car and foot chase set pieces that constantly out do themselves for inventiveness and flat-out entertainment value.

Dynamic storytelling and powerful performances bring out the pathos in an unusual tale of conflicting loyalties set on the criminal edges of a travelling community.

Elements of this crime drama/family saga are good - in particular, performances from two of Ireland's finest actors, Michael Fassbender and Brendan Gleeson - but as a whole it fails to make a lasting impact.

"Trespass Against Us" plays like the quirky indie-fication of the family gangster movie, its scrappiness overlaid with a patina of we're-all-in-this-together slickness.

The movie doesn't play on the tension between these two moods so much as tread water between them, unsure what it wants to do to the audience.