Lands with a thud.

Any movie concerning the manipulation of a character's mind is going to present an unreliable narrative. Inevitably the rug is going to be pulled from said character, usually upending the audience as well.

Danny Boyle's latest Trance is but one more film that tries to bait and switch us, but unfortunately the only effective twist in this tale is the rapid deterioration of an illogical but often gripping thriller into a sloppy and occasionally puerile mess, with a third act that lands with such a thud that any goodwill earned early on seems to be a hazy memory of a different film.

Trance tells the story of Simon (James McAvoy), an apparently naive auctioneer caught in the middle of a high stakes art heist who loses his memory after a crack on the head from the heel of a shotgun wielded by thief Franck (Vincent Cassel). Enter Elizabeth (Rosario Dawson), the hypnotherapist hired by Franck to break through Simon's amnesia to reveal the location of a £25 million painting that vanished in the robbery.

The logic of the film is murky from the get go, but Boyle fires Trance out of the gate with such furious pace that allows little time to stop and pick apart the pseudo-scientific aspects of hypnotism as depicted here. Typically of the director, they style seems to take precedence over the substance, and a terrific soundtrack (all the better if you're fortunate enough to see the film in a Dolby Atmos theatre) contributes to the slickness of it all.

Truth be told, there's a lot in Trance that is pretty enjoyable. The cool neo-noir vibe works well despite the obvious cracks in the surface of the script.

Until, that is, the cracks become a gaping crevasse, torn open by the baffling decisions to hang a fairly significant story point on a frankly idiotic idea, and grind the relentless charge toward the climax to a halt with turgid exposition that makes little sense in the context of the story. It's simply bad writing, and the film has no time to recover, left instead with an ending that has zero real impact beyond the crushing confusion of it all.

Trance had the potential to see Danny Boyle to get back on track after a couple of minor works (Slumdog Millionaire, 127 Hours) that generated a lot of awards buzz but little enduring quality. It's disappointing to see a filmmaker with such a unique and varied catalogue of work hit a rough patch like this, but if you're waiting for a work that shakes Boyle from his slump, Trance just isn't it. 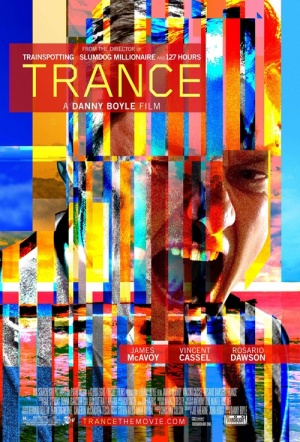