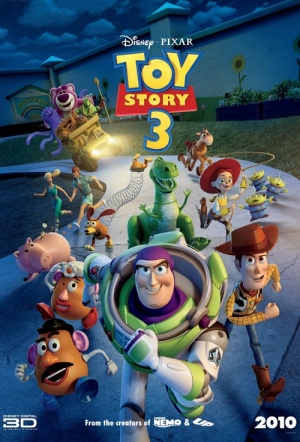 Woody, Buzz and all the gang are back for Disney/Pixar's third (and probably final) Toy Story adventure – this time in glorious 3D.

The toys are dumped in a daycare centre after their owner, Andy, departs for college. There they meet a bunch of new pals, not including Ken (as in Barbie & Ken). Voiced by Michael Keaton, Ken isn't the simple-minded, fun-loving guy you might imagine but rather a vain narcissist.

This installment is written by Michael Arndt, the scribe of Little Miss Sunshine.

This tertiary adventure delivers welcome yet nonessential fun, landing well after its creators have grown up and succeeded toying with more sophisticated stories.

One of the best films of the year, Pixar’s long-awaited latest scores in every department. Funny, affecting and dramatically fearless, it’s as fine a threequel as you could hope for. Bring tissues – lots of tissues.

As sweet, as touching, as humane a movie as you are likely to see this summer.

This is a jolly, slapstick comedy, lacking the almost eerie humanity that infused the earlier “Toy Story” sagas, and happier with action and jokes than with characters and emotions.

As great as its predecessors and then some

This film becomes the kind of love note to movies we want and need.

A kids’ movie for grown-ups. A grown-up movie for kids. Exactly what you’d expect — and hope for — from the latest, and we’re guessing final, Woody and Buzz adventure.

This terrific trilogy topper does all the things you want it to, with laughs, danger and action, starting off with a neat introduction of a Wild West adventure taking place in Andy's youthful imagination.