To Rome with Love 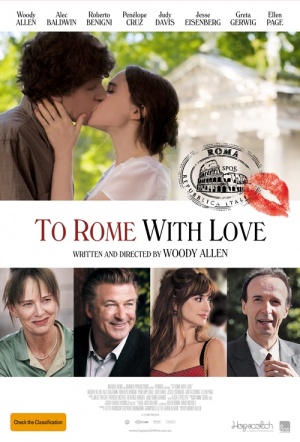 Woody Allen's Italy-set comedy. The awesome ensemble cast includes Allen, Jesse Eisenberg, Elliot Page, Penélope Cruz, Alec Baldwin, Greta Gerwig and Roberto Benigni. The story is comprised of four separate vignettes, following the romantic misadventures of various characters in Rome - a retired American opera director tries to make a star of his daughter's father-in-law to be, who can only sing in the shower; a pair of newlyweds are separated for a day and have their fidelity tested by a prostitute, movie star and a burglar; a middle-class office worker unexpectedly becomes a celebrity targeted by the paparazzi; and an architect runs into a young man who reminds him of a younger version of himself - and is about to make the same romantic mistakes.

This is Allen's 43rd feature film. The last time he appeared on screen as an actor was in 2006's Scoop.

To Rome with Love / Reviews

One of the most delightful things about "To Rome With Love" is how casually it blends the plausible and the surreal, and how unabashedly it revels in pure silliness.

There is some fun to be had with all the discomfiture and unease; but some of the jokes and situations simply don't work.

Generates no particular excitement or surprise, but it provides the sort of pleasure [Allen] seems able to generate almost on demand.

An affectionate but meandering comedy that contemplates romance, fame, legacy and longing.

The film's litany of bad ideas overshadows any of its thematic concerns.

Baldwin, Cruz and Davis shine in a farce that overstretches itself into bellylaugh hits, but also some satirical misses.

Palatable overall, if vaguely inauthentic and unsatisfying, like an allegedly local meal bought at a tourist restaurant.