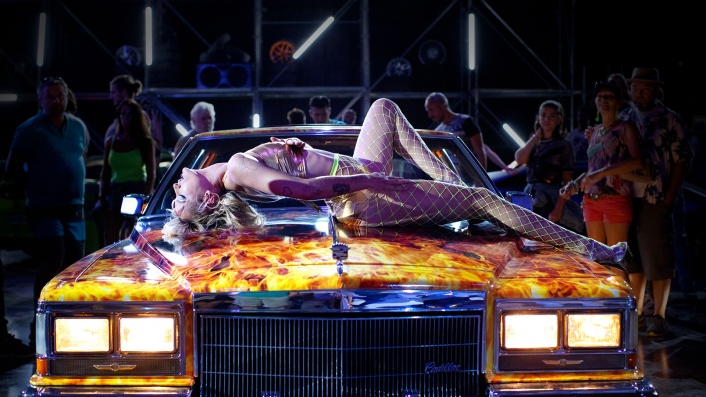 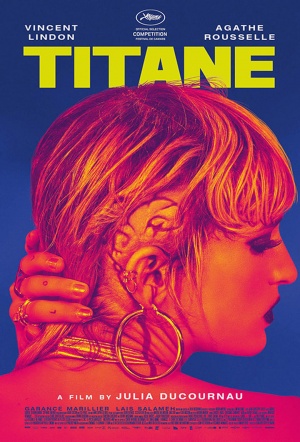 "Julia Ducournau brazenly smashes the mould with this twisty tale about Alexia (Agathe Rousselle), an erotic dancer with a peculiar penchant for muscle cars, who also happens to be a serial killer when the random urge takes her, or people pests provoke retaliation. When a murder goes awry, Alexia must go on the run, and her path leads her to a fire station populated with hunky young firemen and their steroid-consuming aging chief ( Vincent Lindon). Prone to doubts about his masculinity, he’s also grieving for Adrien, a teenage son who disappeared years earlier. Alexia, binding down her breasts and her burgeoning, unwanted pregnancy sired by a Cadillac, becomes an improbable Adrien..." (Whānau Mārama: New Zealand International Film Festival)

A daringly queer and undoubtedly controversial ride, resulting in a most uncommon monster movie...

Both richly cinematic and pregnant with nuance and meaning.

An alluring visual nightmare you can’t pull away from.

A mindblower that keeps you guessing for all of the film's excellent 108 minutes.

A viscerally violent and darkly comedic yet tender experience...

For all its reckless style and velocity, Titane doesn't seem to know where it wants to go.

No matter how you react, Titane has the integrity of sincerity and the authority of a filmmaker's real skill and vision.

(Titane) is an extreme movie, violent and pitiless and funny, but the space it provides for not just tenderness but contemplation makes it an "extremely" thought-provoking film as well.

A messy, provocative and wild piece with attitude and style that is never uninteresting.

It all feels like an overworked in-joke, a bait-and-switch story whose hard-right swerve into conventionality is probably intended to be its most shocking element.

A symphony of disturbing and dark madness unlike anything you've ever seen - and I mean that in a good way.

Titane is a bit like a pet cat dropping a dead mouse at its person's feet: It's shocking, and kind of gross, but deep down, a loving gesture.

Titane is so self-consciously transgressive and weird, that it's difficult to discern who it's for...