Tinker Bell and the Pirate Fairy 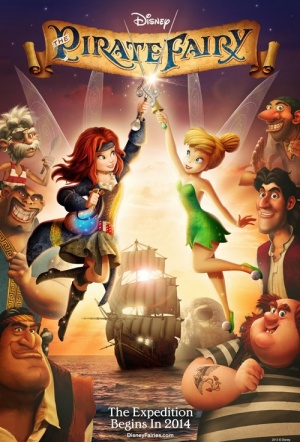 Tinker Bell and her friends go on a high-seas adventure after a pirate fairy steals their Blue Pixie Dust, in Disney Animation's sixth Tinker Bell movie.

A misunderstood dust-keeper fairy named Zarina (voiced by Mad Men's Christina Hendricks) steals Pixie Hollow's all-important Blue Pixie Dust, and flies away to join forces with the pirates of Skull Rock, including a young pirate named James (The Avengers' Tom Hiddleston)... the future Captain Hook. Tinker Bell (Mae Whitman) and her fairy friends Vidia, Iridessa, Fawn, Silvermist and Rosetta must embark on the adventure of a lifetime to return it to its rightful place. However, in the midst of their pursuit of Zarina, Tink's world is turned upside down: she and her friends find that their respective talents have been switched.

There are some gorgeous Disney touches, rabble-rousing songs on the pirate ship and the usual 'best friends for ever' message.

Hiddleston has silver-tongued fun as a young Captain Hook, but the results are as unmemorable as they are innocuous.

Cheaply made... [but Tinker Bell movies are] getting slyer and more interesting on their own terms.

True flights of fancy - as when the fairies make an imaginary man walk and dance by manipulating an overcoat, tricorn hat and buckled boots - are far too rare.

So much better than one would expect for a fifth installment in a franchise, this tribute to female friendship and girl power is a kick.