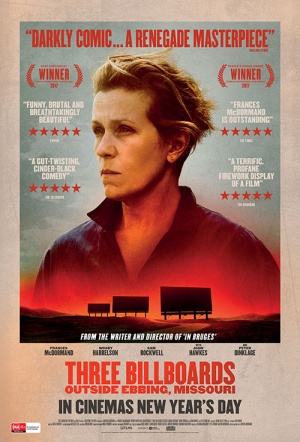 Frances McDormand and Sam Rockwell give Oscar-winning performances in this darkly comic crime mystery from the writer-director of In Bruges, following a mother who's fed up with her daughter's murder case having gone unsolved for months. To kick things back into gear, she buys billboard space in her small town and slams the local law enforcement. The film was nominated for seven Oscars in total which included Best Picture, Director, and Original Screenplay.

Writer/Director Martin McDonagh follows his uproariously funny In Bruges and Seven Psychopaths with that rarest of cinematic treats, an entertaining and stimulating movie, with a superb script, rich characters and a cracking cast. Think the dramatic power of Coen brothers’ No Country for Old Men, and the outrageous humour of The Big Lebowski, and you’re within a billboard’s-length of getting the picture.

It’s far from a masterpiece, yet it holds you, it adds up, and it’s something to see.

It all makes for soaringly satisfying viewing, yet the satisfaction comes from blistering performances and virtuosic screenwriting, and absolutely nothing else.

A bold and showboating affair, robustly drawn and richly written; a violent carnival of small-town American life. Yet it has a big, beating heart, even a rough-edged compassion for its brawling inhabitants.

Can be celebrated for putting the 60-year old McDormand centrestage and letting her tongue rip, and for the slightly risqué manner in which it elicits laughs/gasps from its viewers.

It's a renegade masterpiece that will get you good.

While the film continues almost throughout to generate great whoops of shocking laughter, it's the notes of genuine sorrow, compassion and contrition that resonate.

Illuminates the multifarious despicable ways that humans treat each other…