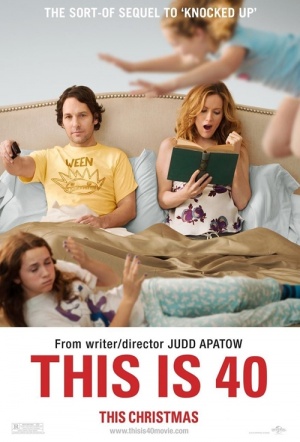 Knocked Up introduced Pete (Rudd) and Debbie (Mann) as the jaded faces of parenthood. Years later the couple are approaching 40 and life continues to throw up complications - Debbie's in denial about her age, Pete's music business is failing, and their two daughters grow increasingly annoying. As the pair bicker their way through the problems, cracks in their relationship begin to show.

Pete and Debbie's two daughters are played by Apatow and Mann's real-life kids, Maude and Iris.

An acutely perceptive, emotionally generous laffer about the joys and frustrations of marriage and middle age.

A pleasantly sprawling, perceptive study of mid-life angst that never lacks for laughs.

There are a lot of loose ends and a few forced conclusions. But, then again, the acceptance of imperfection is Mr. Apatow's theme...

This is laboured. This is aimless.

The film has as much to say about family dynamics as a couple's wavering love.

A real step up for Apatow. His masterpiece? Quite possibly.

Even with all its ups and downs, there are more than enough bawdy laughs and truthful emotional moments to put this over...

If two-and-a-half hours of people shouting at each other for no reason is your idea of comedy, then this film will appeal. But everyone else should avoid.