The Year My Voice Broke 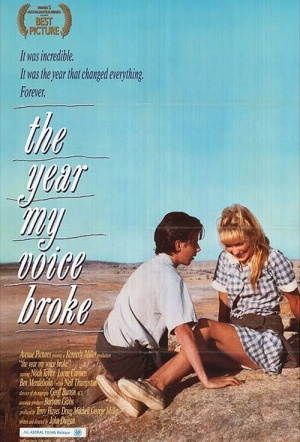 A rural NSW love triangle infused with teenage angst, as Noah Taylor and Ben Mendelsohn battle for the affections of a beautiful girl.

"Co-produced by George Miller (Mad Max), The Year My Voice Broke sparks with the joys and anxieties of being on the verge of adulthood. Danny (Taylor) is an awkward teenager with a near-obsessive crush on the beautiful Freya (Loene Carmen). His plans for seduction are abruptly halted by the arrival of an older rugby star, Trev (Mendelsohn in an AFI Award-winning role). Danny's unreciprocated love, Trev's rebelliousness and Freya's family secrets soon send all three on a course for destruction." (Sydney Film Festival)

The Year My Voice Broke / Reviews

The characters are memorable ones, and beautifully played by the three young newcomers, with Noah Taylor especially effective as the lovesick Danny.

A lovingly crafted and deeply affecting film, this might be likened, in terms of both quality and perception, to Rob Reiner's excellent Stand By Me.

"The Year My Voice Broke" (a terrible title) sets you up for a dreamy coming-of-age saga, then delivers something tougher, moodier and more challenging.

''The Year My Voice Broke'' is certainly not fresh, but it is so pleasant and unpretentious that we can almost forget the total lack of surprise in this deftly acted Australian film.

The backwoods settings fit beautifully with the themes of Duigan’s screenplay; just as adolescence feels dislocated from adult life, the Southern Tablelands are distant but familiar.

A brilliantly acted and strangely haunting vision of life's most hellish period.

Miles above the standard coming-of-age flick.