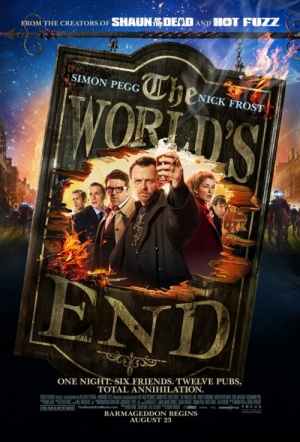 20 years after attempting an epic pub crawl, five childhood friends reunite when one becomes hell bent on trying the drinking marathon again. The instigator is Gary (Pegg), a 40-year old man trapped at the cigarette end of his teens. His aim: to reach the fabled pub, The World's End, with his chums. En route, they discover that not only have they changed, but so has their home town. With a powerful force controlling the townsfolk, reaching The World's End is the least of their worries.

Concluding their loose ‘Cornetto trilogy’ after Shaun of the Dead and Hot Fuzz, The World’s End sees director Edgar Wright reteam with Simon Pegg and Nick Frost, and the result is some of the best work they’ve committed to screen. Shaun may be almost ten years old (and their TV show Spaced even older), but the trio have lost none of their chemistry, with The World’s End benefiting greatly from these gentlemen being a little older and more experienced craftsmen. Wright in particular seems set on making the film his own, with lower levels of homage or parody than its predecessors.

A fraction less gut-bustingly goofy than its predecessors.

The armageddon-through-beer-goggles approach brings the chuckles, but The World’s End stands up as a great example of the genre it ribs. Nostalgic, bittersweet and very, very funny.

This is a tighter, smarter film than either Shaun of the Dead or Hot Fuzz, and buried beneath all the blue-goo aliens and terrible punning is a heartfelt meditation on the perils and pleasures of nostalgia.

The World’s End is a fitting end to the trilogy: it is by turns trashy, poignant and gut-bustingly funny, and often all three at once.

At once a Big Chill-style old-pal reunion story and an Invasion of the Body Snatchers homage doused in beer and bad-boy humor ...

Bravely refusing to rigidly adhere to a formula that has been so successful, Wright, Pegg and Frost’s Cornetto Trilogy closer has tonal shifts you won’t expect, but the same beating heart you’ve been craving.