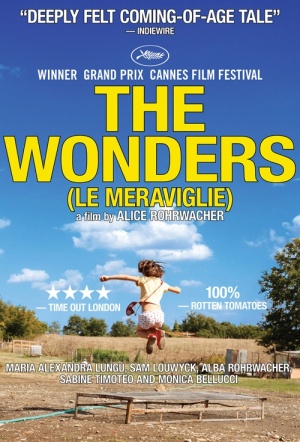 "Nothing will be the same at the end of this summer for Gelsomina and her three younger sisters. She is the designated heir of the strange, secluded kingdom that her father constructed around them to protect his family from “the end of the world”. An extraordinary summer, when the strict rules that hold the family together, are beginning to break: in part due to the arrival of Martin, a German boy on a youth rehabilitation program, and in part the local community’s participation in a TV competition for big prizes 'Village Wonders', presented by the mysterious Milly Catena." (Cannes Film Festival)

Aiming to capture a young teen’s sense of belonging in a family determined to steer its own course, the pic has intermittent rewards yet isn’t weighty enough to justify a Cannes competish slot.

It is a light and diverting piece work... there is charm, though it is a little sentimental and undemanding, without the real emotional power that many were expecting from Rohrbacher.

A curiously resonant tale outside the norm affirms the importance and inherent mystery of the natural world.