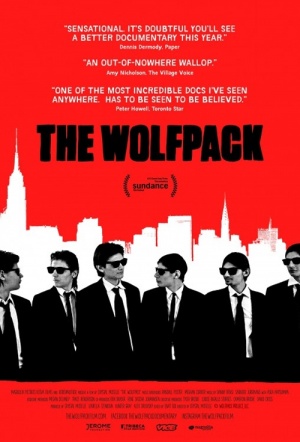 Sundance-winning documentary following the Angulo brothers who were shut off from society, by their parents, living in a Manhattan apartment with nothing but themselves and TV for company. Filmmaker Crystal Moselle gains access to their bizarre world through an archive of home movies and interviews.

"Locked away from society in an apartment on the Lower East Side of Manhattan, the Angulo brothers learn about the outside world through the films that they watch. Nicknamed the Wolfpack, the brothers spend their childhood re-enacting their favorite films using elaborate homemade props and costumes. With no friends and living on welfare, they feed their curiosity, creativity, and imagination with film, which allows them to escape from their feelings of isolation and loneliness. Everything changes when one of the brothers escapes, and the power dynamics in the house are transformed. The Wolfpack must learn how to integrate into society without disbanding the brotherhood... Moselle crafts a captivating portrait of an extraordinary family and inquires into the true nature of identity and creativity." (Sundance Film Festival)

There is much to enjo...if nothing else it begs a where-are-they-now sequel a few years down the road.

A once-in-a-lifetime subject, sensitively brought to the screen, the Angulos’ story makes the strange seem ordinary and the ordinary, insane.

Those euphoric moments, scored to Black Sabbath, show the brothers sneaking out in their masks, discovering activism and growing into individuals. You’ll wish Moselle had started, not ended, there.

Not since Grey Gardens has a film invited us into such a strange, barely-functioning home and allowed us to gawk without reservation.

Keeps us teetering uneasily between empathy for a remarkable human drama and the suspicion that we're not getting the whole truth, let alone nothing but the truth.

Even in the context of Tolstoy's famous dictum that every unhappy family is unhappy in its own way, the story of the Angulo brothers stands out.

Doesn't quite make the most of fascinating and likeable subjects.

A compelling glimpse into a bizarre, hermetically sealed life. The brothers are easy to warm to, and the family’s slow introduction into the outside world is quietly moving.