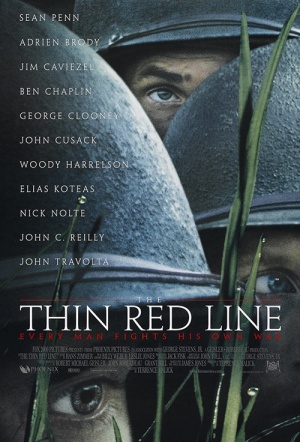 Based on the novel by James Jones, The Thin Red Line tells the story of a group of men, an Army Rifle company called C-for-Charlie, who change, suffer, and ultimately make essential discoveries about themselves during the fierce World War II battle of Guadalcanal. It follows their journey, from the surprise of an unopposed landing, through the bloody and exhausting battles that follow, to the ultimate departure of those who survived.

At two hours and 45 minutes, The Thin Red Line gives ample evidence of suffering all manner of cuts, if not having been simply hacked into its final shape. But this violence only adds to the movie's brave, strange, eroded nobility.

It's a genuinely epic ciné-poem that essentially sidesteps history, politics and conventional ethics to deal with war as an absolute, inevitable and eternal facet of existence.

Most platoon dramas emphasize comradeship, but this most cosmic and interior of war movies is finally about the impossibility of escaping one's own head.

The Thin Red Line is an epic aestheticisation of World War II, a movie at once bold and baffling, immediate and abstract.