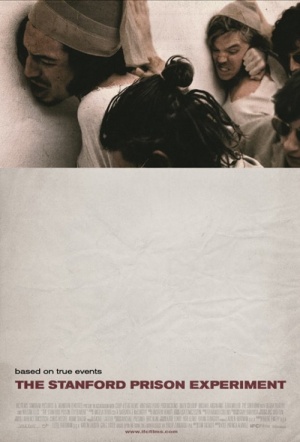 Psychological thriller based on the true story of Stanford University professor Dr. Philip Zimbardo (played by Billy Crudup), who, in 1971, cast 24 student volunteers as prisoners and guards in a simulated jail to examine the source of abusive behavior in the prison system.

"The participants rapidly embody their roles - the guards become power-hungry and sadistic, while the prisoners, subject to degradation, strategise as underdogs. It soon becomes clear that, as Zimbardo and team monitor the escalation of action through surveillance cameras, they are not fully aware of how they, too, have become part of the experiment." (Sundance Film Festival)

The combination of relentless forward drive and gruesomely fastidious detail, while audacious and admirable in theory, begins to pay dwindling returns in a picture that feels rather longer than its 122-minute running time.

Director Kyle Patrick Alvarez deserves all the praise in the world for the way he cranks up this pressure cooker script.

For all its flaws it's a rich, thought-provoking film which, while challenging, is not without humor and visual pleasures.