The Son of No One 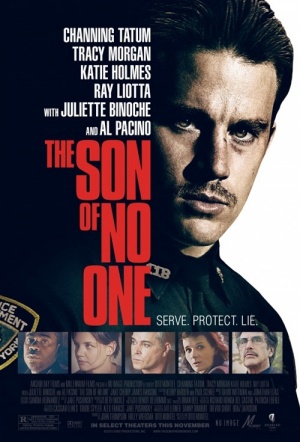 New York cop drama with an all-star cast including Channing Tatum, Al Pacino, Ray Liotta and Katie Holmes. From the director of Fighting.

"Jonathan (Tatum) is a second-generation cop who gets in over his head when he's assigned to re-open a double homicide cold case in his Queens neighbourhood. An anonymous source feeding new information to a local reporter leads to evidence suggesting a possible cover-up be the former lead detective (Pacino), who was on the investigation. As Jonathan digs deeper into the assignment, a dark secret about the case emerges, which threatens to destroy his life and his family." (Official Synopsis)

The Son of No One / Reviews

Contrived and implausible, at times absurdly so.

Self-destructs in a ludicrous, ineptly directed anticlimactic rooftop showdown in which bodies pile up, and nothing makes a shred of sense.

Here's a bad movie with hardly a bad scene. How can that be? The construction doesn't flow. The story doesn't engage... Yet here is a gifted cast doing what it's asked to do. The failure is in the writing and editing.

Performances are strong across the board, and the movie offers a solid sense of place. But the mysteries, once explained, don't make a lot of sense.

A few individual performances survive - Liotta finds a little of his old edge, and Pacino briefly revisits Serpico territory - but they're smothered in the slow-burning absurdity.