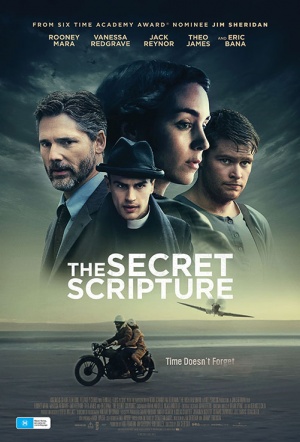 "Roseanne McNulty (Redgrave) must vacate the soon-to-be demolished mental institution in Roscommon, Ireland that she's called home for over 50 years. The hospital's psychiatrist, Dr. William Grene (Bana), is called in to assess her condition. He finds himself intrigued by Roseanne's seemingly inscrutable rituals and tics, and her fierce attachment to her Bible, which she has over the decades transformed into a palimpsest of scripture, drawings, and cryptic diary entries. As Grene delves deeper into Roseanne's past, we see her as a young woman (Mara), whose charisma proves seductive. We learn that she moved to Sligo to work in her aunt's café, fell in love with a dashing fighter pilot (Jack Reynor), and that a local priest (Theo James) fell tragically in love with her." (Toronto International Film Festival)

It doesn't take too long for Jim Sheridan's period romance "The Secret Scripture" to contort itself into a befuddlingly bungled mess. But at the outset, it seems to have everything going for it.

Goes from a fairly forgettable romantic drama into a full-tilt fiasco.

All the window dressing in the world isn't enough to hide the fact that this misbegotten load of old tosh really doesn't add up to a coherent or credible yarn. Avoid.

It is an elegantly crafted, expertly acted old-fashioned weepie that manages to sell a whopper of a plot that would bring a blush to the cheeks of Nicholas Sparks.

A maudlin adaptation hampered by low energy and lapses of logic, The Secret Scripture does a disservice to the book it is based on, and the Irish history it plunders.