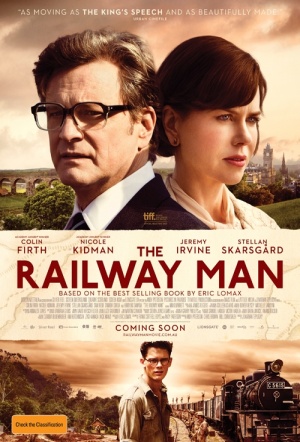 Based on a true story, Colin Firth is former prisoner of war Eric Lomax who, years after his torture at the hands of the Japanese, sets off to confront the man responsible. Co-stars Nicole Kidman, Stellan Skarsgård, Jeremy Irvine and Hiroyuki Sanada.

Lomax (Firth), a British Army signals officer who was captured by Japanese soldiers in World War II, was brutally tortured when his love of the railway made him a spy suspect. Many years later, Lomax is persuaded by his wife Patti (Kidman) to find his torturers. Accompanied by his best friend (Stellan Skarsgård), he returns to the scene of his incarceration and abuse, seeking out his captor (Sanada) in an attempt to let go of a lifetime of bitterness and hate.

For a film based on an extraordinarily touching true story, The Railway Man is distractingly stagey. It starts off with a middle-aged meet-cute on a train where we encounter Colin Firth as Eric Lomax, a dweeby trainspotter who needs to be brought out of his shell by sweet, cardigan-wearing Nicole Kidman. But as the film develops it takes a tonal leap, shifting back in history to when young Lomax was a prisoner of war put to work in gruelling conditions on the Thai-Burma railway by brutal Japanese captors.

Lomax found heroism in compassion, and that attitude is what audiences are bound to connect with so deeply here, even if such an outcome proves almost anti-dramatic onscreen.

In Firth’s every grimace and flinch you feel the torment of Lomax’s private world, but emotionally ‘The Railway Man’ feels trimmed and tidied up.

An extremely affecting and accomplished drama.

It's a terrific story... but the film strains so hard trying to sustain the emotional intensity that there's no energy left for the big finish.

At its heart is Firth's visceral performance, which convincingly charts trauma and deep burning vengeance to resolve in a profoundly cathartic way.