The Queen of Ireland 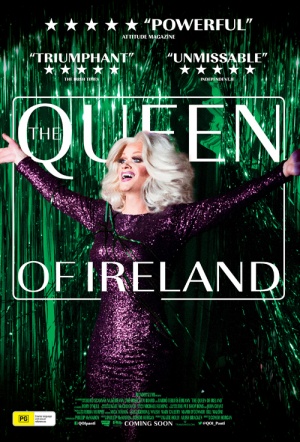 "Meet Pandora 'Panti' Bliss: part glamorous aunt, part Jessica Rabbit; a court jester whose role is to say the unsayable; a figurehead for LGBT rights in her home country of Ireland; and one of the world's great drag queens... follows Panti's epic journey from growing up gay as Rory O'Neill in the small town of Ballinrobe to the birth of her drag persona in the clubs of Japan. Upon returning to Ireland in the '90s, Panti was instrumental in setting up several notorious fetish clubs as well as 'Alternative Miss Ireland' - a vitally important fundraiser for HIV and AIDS causes.

"In reaction to her home country's endemic homophobia, Panti became - in her own words - an accidental activist, penning the 'No More Mr. Nice Gay' blog while also publicly stating on Irish national television that members of Ireland's journalism establishment were unashamedly homophobic. The furor over this last incident became known as 'Pantigate,' which garnered her the support of hundreds of thousands - including Stephen Fry, RuPaul, Dan Savage, and Madonna - and would subsequently set the tone of the campaign for Ireland's historic referendum on gay marriage." (Seattle International Film Festival)

The Queen of Ireland / Reviews

Both a fascinating account of significant culture change and a terrific portrait of a larger than life figure...