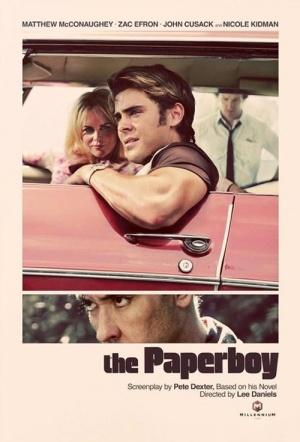 All-star legal thriller set in sweaty 1960s Florida about two brothers (Zac Efron and Matthew McConaughey) investigating the case of a death row inmate (John Cusack) after a woman (Nicole Kidman) convinces them of his innocence. From Lee Daniels, director of the Oscar-winning Precious.

Van Wetter (Cusack) is sentenced to death in Florida for the murder of a policeman. While in prison, Wetter meets by correspondence the sultry Charlotte (Kidman). Believing him innocent, Charlotte enlists the help of investigative journalists Jack (Efron) and Ward (McConaughey). They find inconsistencies in Wetter’s case and battle through the murky waters of Florida's justice system to uncover the truth.

A risibly overheated, not unenjoyable slab of late-'60s Southern pulp trash, marked by a sticky, sweaty atmosphere of delirium and sexual frustration.

Constantly edgy and fascinating to watch, The Paperboy is stronger in its parts than as a whole, mostly due to the script that never fully satisfies.

A throwback to the exploitation cinema of its period. As such, it's grungy, tasteless and hard to take your eyes off.

It is by turns lurid, humid, florid, languid and stupid, but it is pretty much all id all the time.

Great trash, and as Pauline Kael told us, the movies are so seldom great art that if we can't appreciate great trash, we might as well not go at all.

There is so much grit in Kidman and McConaughey's performances, it's a lot for Efron to stand up to, but he does a good job of giving Jack a cocky innocence that is disarming.

This is a tale of murder, idealistic journalism, warped sexual desires, a slipshod legal system and inbred backwater types hostile to outsiders.