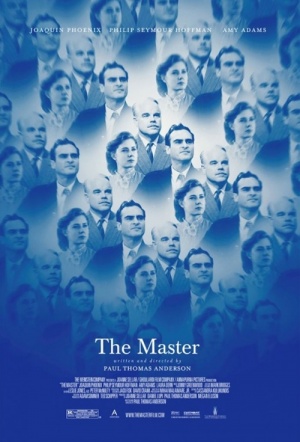 Writer-director Paul Thomas Anderson follows up his masterpiece There Will Be Blood with this 1950s-set drama, loosely based on the founding of Scientology. Lancaster Dodd  (Philip Seymour Hoffman) is the leader of cult religious movement 'The Cause', and Freddie Quell (Joaquin Phoenix) is a troubled, impulsive World War II veteran who Dodd takes under his wing.

Freddie struggles to re-integrate into society after the war, seeking solace in substance abuse and exploding in violent outbursts as he battles his demons. When he stows away on the boat of the charismatic Lancaster, Quell is discovered and welcomed into the midst of The Cause. A bond between the two men forms, and Quell becomes an advocate of Dodd's teachings until pressure from authorities, tensions within the group, and Quell's volatile nature combine to test the pair's relationship.

Inspired in part by Scientology's early days, The Master also includes material once in early drafts of There Will Be Blood. Anderson's musical collaborator on There Will Be Blood, Radiohead's Jonny Greenwood, is back on scoring duties.

A sustained immersion in a series of hypnotic moods and longueurs, an imposing picture that thrillingly and sometimes maddeningly refuses to conform to expectations.

With potent performers and poetic visuals, Anderson has made the boldest American picture of the year.

This is a movie that defies understanding even as it compels reverent, astonished belief.

It is a movie that may alienate and exasperate some, but its audacity, its formal daring and Joaquin Phoenix's performance, make it simply unmissable.

Fabulously well-acted and crafted, but when I reach for it, my hand closes on air.

It's a film bristling with vivid moments and unbeatable acting, but its interest is not in tidy narrative satisfactions but rather the excesses and extremes of human behavior...

[This] spiritual post-war love story will restore your faith in cinema.

A bold, challenging, brilliantly acted drama that is a must for serious audiences.

It's a feisty, contentious, deliberately misshapen film, designed to challenge and frustrate.