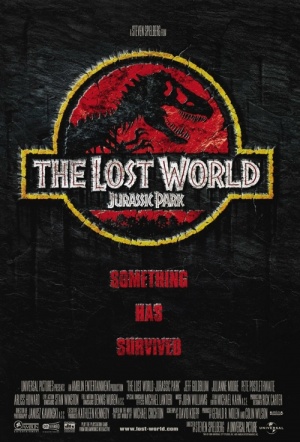 Ian Malcolm (Goldblum) agrees to go when he discovers his girlfriend, Sarah (Moore), is one of the three researchers sent to study the dinosaurs. But what starts as a purely observational expedition soon turns into chaos when another team shows up to capture and exploit the Jurassic wildlife. As the hunters attempt to bring the prized T-Rex to San Diego, the finale sees the giant unleashed on the city.

The dinosaur creations are even better than those in the first film --- credible, breathtaking and frightening. As for the rest, every department pales by comparison.

Take a mish-mash of yesterday's ideas, throw in some stock cliffhanger sequences and top with a dollop of politically correct eco nonsense. Then sit back and watch everyone else on the planet queue to watch it.

While terrifically entertaining, is also structurally out of kilter.

Where is the awe? Where is the sense that if dinosaurs really walked the earth, a film about them would be more than a monster movie? Where are the ooohs and ahhhs?

Many people will find much to divert them in The Lost World, and not worry whether or not it falls short of Jurassic Park.

Not as good as the original, but as far as sequels go, it's way, way above average.

The Lost World certainly has its moments but it's a rather schizophrenic movie that lacks the simplicity of the original.