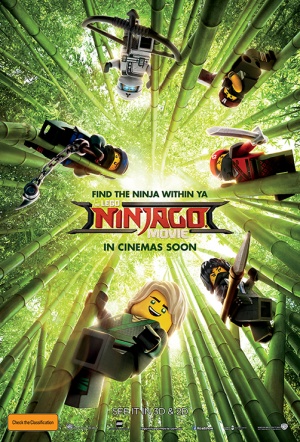 Six teens are high school students by day and ninjas defending their homeland of Ninjago by night in this CGI martial arts comedy featuring the voices of Jackie Chan, Dave Franco and Michael Peña.

It’s a tough act following the masterful LEGO Movie and the greatest Batman film since The Dark Knight, but the LCU gives it a decent shot with their Ninjago brand. Playing as an earnest expression of the West’s love affair with Eastern films, The LEGO Ninjago Movie covers everything from '70s kung fu cinema to big monster flicks. While this setup makes for some cool blockbusting blockbuster moments for the family, it doesn’t have the smarts to follow the rectangular footsteps of the previous LEGO films.

Still plenty entertaining and occasionally very funny, "Ninjago" nonetheless displays symptoms of diminishing returns, and Lego might want to shuffle its pieces a bit before building yet another film with this same model.

I’m sorry to report that the Lego movie enterprise has lapsed into intentional mediocrity.

The franchise is showing signs of fatigue but for now, there's enough here to play with.

There are clever touches along the way – such as a subliminal pun on the phrase "inner peace" – but the plot sticks relentlessly to the most reductive version of the "hero's journey" formula.

Starting to look more than a little threadbare and committee-written.

A perfectly adequate family film for kids who love watching things they've seen many times before (which is to say, most kids), it offers plenty of chuckles for their parents but nothing approaching the glee of that first Lego Movie.

So much screen time is devoted to paternal-abandonment issues that it seems more like The LEGO Kramer vs. Kramer Movie. And about as fun.

Although it doesn’t hit as well as The LEGO Movie or The LEGO Batman Movie, The LEGO Ninjago movie is still a delight, and a promising path forward for future LEGO spinoffs.