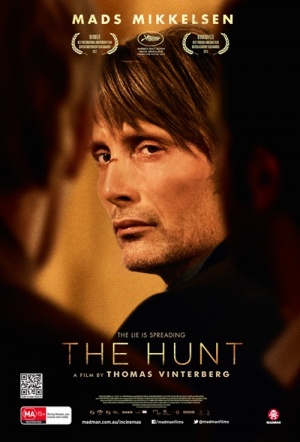 A Danish kindergarten teacher (Mads Mikkelsen, Best Actor winner at the 2012 Cannes Film Festival) becomes the victim of his village’s collective paranoia when he is falsely accused of abusing a child. From writer-director Thomas Vinterberg (Festen).

"Following a tough divorce, 40-year-old Lucas has a new girlfriend, a new job and is in the process of reestablishing his relationship with his teenage son, Marcus. But things go awry. Not a lot. Just a passing remark. A random lie. And as the snow falls and the Christmas lights are lit, the lie spreads like an invisible virus. The shock and mistrust gets out of hand, and the small community suddenly finds itself in a collective state of hysteria, while Lucas fights a lonely fight for his life and dignity." (Cannes Film Festival)

Although it never shirks from showing how unfounded suspicions destroy lives, this excellent drama from Danish director Thomas Vinterberg (Festen) and writer Tobias Lindhom (A Hijacking) has a wonderfully sly sense of understatement about it. There's no music, except to show the passing of time, no melon-smashing SFX when punches fly, and although events do spiral out of control, the method of recounting them never does.

Absorbing if not particularly innovative... will fit snugly into the recent run of solid Danish dramas that have done well at fests and in arthouses worldwide.

A taut, teasing study in sense and susceptibility, given ballast by a suitably shaken and shell-shocked lead turn from Mikkelsen.

Mikkelsen shows just how excellent a performer he is.

An unsettling psychological drama built around a harrowing performance from Mads Mikkelsen.

This is unshakeable storytelling, which is fitting for a film that reveals how certain damage can never be undone.

Beautifully performed and tough as nails, Vinterberg's social drama could not be any more timely.

A "problem picture" in which the problem feels neither urgent nor especially new.