Okay, unless you go in knowing this is set in the same macho fantasy cartoon universe as the likes of the JOHN WICK movies, DEADPOOL or director Patrick Hughes’ testosterone-pumped old school wannabe, loud explosions and clichéd action bore, EXPENDABLES 3, you’re gonna be offended. And I mean really, really offended. This is a movie that thinks murder and mayhem aren’t just fun, but funny, and terrorist acts in the middle of a city are thrilling, rather than terrifying when viewed in a real-world context.

Okay, so putting aside my snooty reviewer hat, and accepting this as a JOHN WICK style fantasy, only with DEADPOOL wisecracks, it’s okay. Nothing more.

Samuel L. Jackson plays an “unkillable” assassin, who speaks and sounds like, well, pretty much every generic Samuel L. Jackson role outside of his Tarantino turns. Sam winds up being protected by Ryan Reynolds, playing Deadpool, only without the costume. He’s basically the bodyguard with the backchat, instead of the merc with a mouth. The two start enemies but before you can say LETHAL WEAPON, they’re best buds.

The action is well handled, but every action beat you’ve seen before if you’re an action movie fan, and worse still every plot twist is so obvious, you can literally spot the double-crosser as soon as they’re on camera.

The best parts of the movie are Richard E. Grant in a minor role as a coked-up lawyer, going full WITHNAIL & I, and the wonderful Salma Hayek as Jackson’s tough as nails wife. Her scenes are all too brief, but she lights up the screen every time, displaying uncanny comic chops.

It would all be so much forgivable action fluff if it wasn’t for the cinematic sin of casting Gary Oldman as the big bad guy and then utterly failing to make the most of him. Here’s Gary, doing the same role basically as he played so memorably up against Harrison Ford in AIR FORCE ONE, and it’s about as memorable as a wet weekend in Palmerston North.

Yeah, it was fun. The snappy dialogue, the action set pieces, seeing Deadpool and Jules from PULP FICTION hang out in London and Amsterdam, but honestly? I saw the movie barely an hour ago and I can barely remember a thing. Except how they wasted Gary, and that’s a crime against cinema hard to forgive.

Still, if you’re getting antsy awaiting DEADPOOL 2 – you’ll love it. Think DEADPOOL, only in a suit and babysitting Sam Jackson.

But whatever you do, please remember, it may look like the world we inhabit, but it’s just a macho fantasy. Forget that and you’re in for a damn disturbing and downright disheartening time. 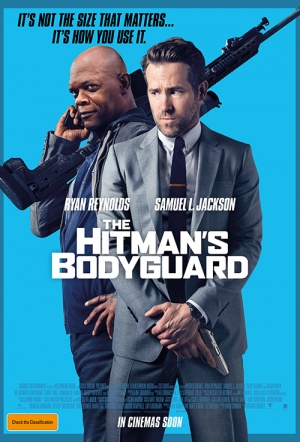