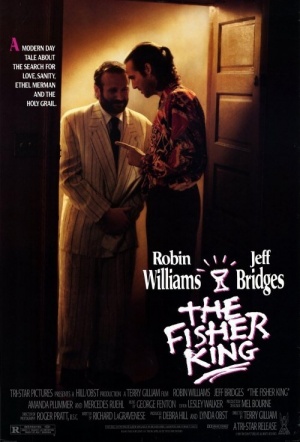 Mad, Terry Gilliam's comedy fantasy starring Jeff Bridges and Robin Williams. After one of his listeners opens fire on a bar, shock-DJ Jack (Bridges) is demoted to a life working in a record store, when he is taken by thugs and rescued by a homeless hero (Williams). As a return for the favour, Parry enlists Jack's help to retreivine the Holy Grail and woe the object of his desire.

Has two actors at the top of their form, and a compelling, well-directed and well-produced story.

For every wild ride through Manhattan by an imaginary Red Knight trailing billows of flame, there is a small, comic encounter in a more down-to-earth mode.

Although there are moments when the mixture of comedy, fantasy and drama don't come off, this is still an original, touching movie that is well worth the price of a ticket.