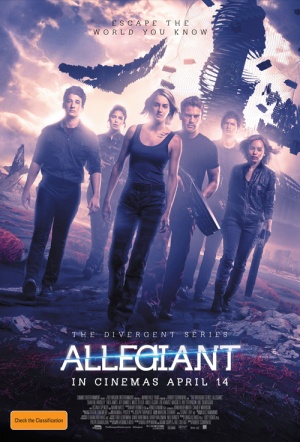 The third entry in the dystopian sci-fi movie series Divergent, based on the novels by Veronica Roth. Following the events from Insurgent, Tris (Shailene Woodley) and Four (Theo James) prepare to climb over the wall enclosing Chicago and into a new, dangerous world.

For the first time ever, they will leave the only city and family they have ever known in order to find a peaceful solution for their embroiled city. Once outside, old discoveries are quickly rendered meaningless with the revelation of shocking new truths. Tris and Four must quickly decide who they can trust as a ruthless battle ignites beyond the walls of Chicago which threatens all of humanity. In order to survive, Tris will be forced to make impossible choices about courage, allegiance, sacrifice and love.

Despite a welcome enhancement of the futuristic aesthetics on display and an increased emphasis on faintly gritty action scenes, this third entry in the Divergent series suffers greatly for the over-familiarity of its generic YA dystopian aspirations.

Although “Allegiant” does recapture the original film’s sense of constantly discovering and adapting to fresh information, audiences no longer identify with anyone in particular.

This over-extended teen dystopia is treading water, coming up short on its trademark punchy plotting, teen self-discovery and the wonderful Woodley.

It all leads to a climax so staggeringly lazy and glib that you honestly expect Woodley just to turn to the camera in the final scene, shrug her shoulders and walk off.

Studded with enticing science-fiction ideas, but it keeps such a poker-straight face while presenting them, you often can’t help but crack up.

Big but boring, expansive but cheap-looking, Allegiant spins in place, waiting for next year’s Ascendent to come along and offer resolution.

For a film that takes great pride in its heroine's nonconformism, pretty much everything in Allegiant feels conventional.

Instead of bringing much-needed clarity, Allegiant piles on yet more bamboozling mythology to flummox and confound.