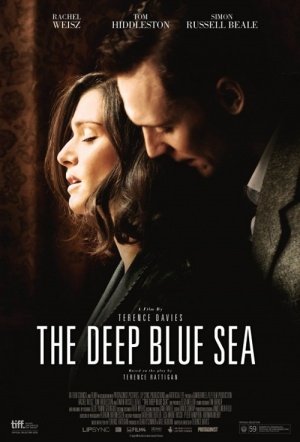 Romantic drama, set in post World War II Britain, about a High Court judge's wife (Rachel Weisz) who abandons her privileged life to embark on an affair with an Air Force pilot (Tom Hiddleston). Based on Terence Rattigan's play.

"Hester (Weisz) is the beautiful wife of judge Sir William Collyer (Simon Russell Beale), theirs is a companionable rather than a passionate marriage. When Hester meets a young ex-RAF pilot, Freddie (Hiddleston), she falls devastatingly in love with him, and to the shock of those around her she leaves her marriage to live with him in shabby lodgings. But as time passes, Hester comes to realise that the dashing but damaged Freddie is unable to return her all-consuming passion." (London Film Festival 2011)

2011Rating: M, for a scene of sexuality and nudity98 minsUK
DramaRomance

Davies is in fine form here, with luminous perfs, especially from Rachel Weisz, rounding out a classy package.

A lyrical study of infidelity and loneliness.

The social and psychological particulars, and the wonderful period details, are part of the background...

A melancholy film without a doubt, but with great sweetness and delicacy.

The film feels pity for the exhausted city of London. The vast metropolis was the scene of greatness during World War II, but a few years later, it is drab, hungry and without optimism.

Exceptionally well-made and completely fearless in its depiction of the widest range of romantic emotions.

Classic Davies territory and a potent reminder of why he is a director to cherish.

Its patient elegance is a rare thing we should nurture.