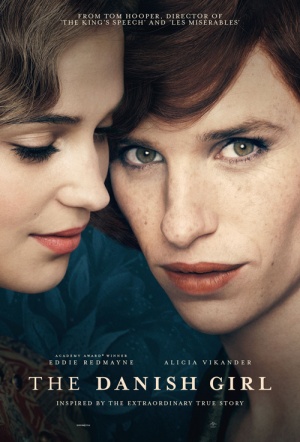 Academy Award winner Eddie Redmayne (The Theory of Everything) and director Tom Hooper (The Kings Speech) gun for another Oscar with this true love story inspired by Lili Elbe (Redmayne) and Gerda Wegener (Alicia Vikander, Ex Machina), a married couple whose unbreakable union helped Lili transition from a man to a woman.

To call The Danish Girl ‘Oscar-bait’ seems trite, but with the magical formula of an outstanding dramatic lead, hot subject matter and biopic, it’s hard to imagine a world where Eddie Redmayne won’t nab the Best Actor gong for the second year running.

Destined to be the year's most talked-about arthouse phenomenon.

The film is so tasteful that you might barely realise the story involves a man having his penis surgically removed at a time when such a thing was barely known or possible.

Has charm, but not quite passion.

Redmayne's translucence of skin and of expression serves his performance well.

It frankly takes a while to unpack its themes and gain our interest, but it finally allows us to unmistakably experience the powerful drives that motivate the action.

Redmayne and Vikander, along with the film's dusky flourishes, allow The Danish Girl to reach beyond the awards it was designed to win.

Redmayne is able to shed his own persona to go undercover into the lives of people facing extreme physical and emotional challenges.

Tom Hooper transforms this story into the most gorgeous and accessible film that you could make given the subject.

Redmayne's fine bone-china features are prime movers in all of this being convincing but so is his performance, reticent, vulnerable and acutely observed.