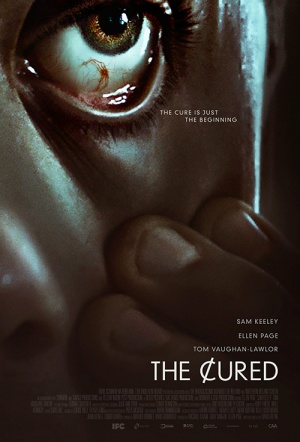 Elliot Page stars in this thought-provoking horror-thriller about reintegrating cured ex-zombies into society after a zombie plague.

"Senan (Keeley) has been through hell. When the plague swept across Ireland he was among the thousands afflicted and rendered into rabid ghouls. Senan did horrible things he cannot forget — and neither can the public, nor the authorities charged with policing those released from captivity. Senan's sister-in-law Abbie (Page), however, is willing to give him a second chance. She lets him live with her and her young son, believing that Senan's actions while infected were beyond his control. But as an angry anti-cured movement burgeons in tandem with an increasingly radicalized pro-cured movement, Abbie is forced to question just how far her trust should be pushed." (Toronto International Film Festival)

Mostly it plays as a somber drama about grief, guilt and self-loathing, with both lead figures shell-shocked in their way.

Anyone digging through the cemetery soil again had better have fresh ideas. "The Cured," the debut feature from David Freyne, has roughly two.

There's a drab air to this low-budget film ... which even Sam Keeley's presence and Tom Vaughan-Lawlor's menace can't totally re-animate.

It's a moody horror movie that favors metaphor over mayhem until its violent, chaotic final third, at which point the screaming starts in earnest.

The confluence of rebellion, personal responsibility and genre violence never quite gels, perhaps because the realities of a zombie movie ultimately dictate where these things are headed.

It's a clever concept that's fairly well executed, if a tad contrived in spats, with tension that slowly boils to the surface as the zombies inevitably come back for a bite.