One of the most promising movies this year. My expectations were high in Ridley Scott and the talented cast including Michael Fassbender, Brad Pitt and Javier Bardem. It's not bad, but considering the amount of potential, The Counselor is a major disappointment. The screenplay, written by acclaimed novelist Cormac McCarthy is one of the film's highlights. McCarthy is mostly known for his book No Country For Old Men. The Counselor is nowhere near as brilliant as the Coen brothers masterpiece. Michael Fassbender gives a good performance as the counselor. Javier Bardem another ridiculous hairstyle and wears red tinted shades. I would have liked to have seen more Brad Pitt in the movie. Brad Pitt's performance is fantastic and easily the most interesting character. Cameron Diaz's performance is overcooked as the mysterious femme fatale type of character. The Counselor is very violent. It features one of the most shockingly brutal deaths of the year, and one of the most bizarre sex scenes I've ever seen. I found the movie a bit too wordy for my taste and it could have done with some more suspense and thrills. The Counselor is a decent thriller with good acting. Just don't expect too much.
0 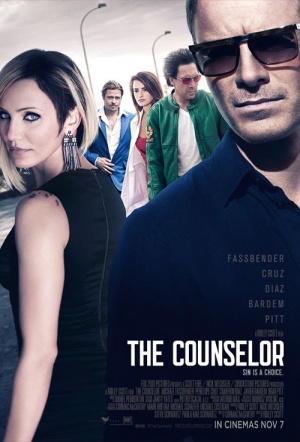