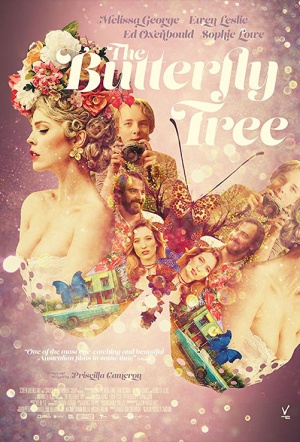 A father and his son find themselves competing for the attention of a florist (Melissa George) in Priscilla Cameron's feature debut.

"Young Fin (The Visit's Ed Oxenbould) and his father Al (Ewen Leslie) are grieving the loss of Fin's mother three years before, albeit in very different and singular ways. When their small town gains a new florist — a mysterious, warm, and beautiful woman named Evelyn (the luminous Melissa George) — Al and Fin encounter her uniquely, each without the other's knowledge." (Toronto International Film Festival)

The heart-in-hand sincerity of its worldview is what makes the film endearing and aggravating by turns.

The air and aroma of The Butterfly Tree is slushy and thick, so thick you could cut it with a knife.

Cameron may be an expert when it comes to creating visual magic but images aren't everything. Words do matter.

Saddles its story with too much obviousness and convenience to have the desired impact.

If only the story could have lived up to the high standards and interesting choices driving the rest of the movie.

This rather underpowered tale of sexual awakening and grief proceeds at a leisurely pace before a couple of late scenes that strive to outdo each other for sheer melodramatic overreach.

It is a bold and promising work, rich in imagery and led by uniformly strong performances.