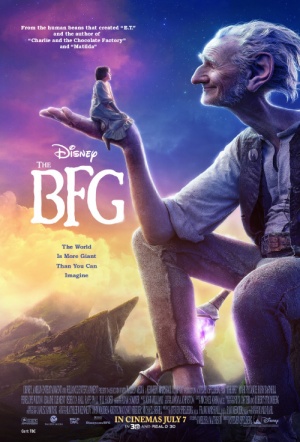 Steven Spielberg and the late screenwriter of E.T.: The Extra-Terrestrial adapt Roald Dahl's 1982 novel about The Big Friendly Giant, in 3D. Follows Sophie (newcomer Ruby Barnhill), the Queen of England (Penelope Wilton) and The BFG (Mark Rylance) on an adventure to capture the evil, man-eating giants who have invaded the human world. The cast of giants includes Bill Hader and Jemaine Clement.

This splendid Steven Spielberg-directed adaptation makes it possible for audiences of all ages to wrap their heads around one of the unlikeliest friendships in cinema history...

Flaws aside, this is a superior, inventive kids' film, and one that's bound to make Rylance's giant a favourite with younger audiences.

It’s a weighty technical accomplishment – the extraordinary detailed motion-capture technology alone... is river-straddling bounds beyond anything you’ve seen before.

A typically distinctive, eccentric and seductive star performance from Mark Rylance absolutely makes this movie what it is.

Spielberg has already made one brilliant movie about a young English child thrust into a dangerous environment with 1987's Empire of the Sun, and perhaps a further touch of darkness would have added some contrast here.

One of the simplest and straightforward tales Spielberg has directed. If it's quiet in parts, that's indicative of the contemplative mood at work, and also his commitment to dreams as a wellspring of creativity and happiness.

Leaves you believing in the magic of dreams.

The film represents the director in a more pensive, even philosophical vein, less interested in propulsive cinema and more reflective about what would seem to mean the most to him...

Like a mandated visit to a beloved but doddering grandparent...

Parents looking for a 21st-century E.T. to share with their kids are bound to be a bit disappointed even as their eyes are dazzled.