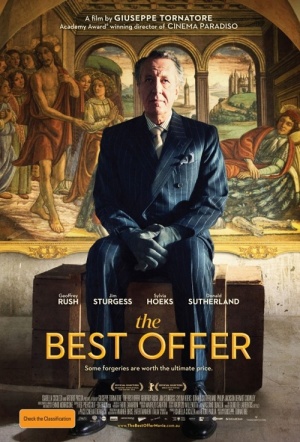 "Virgil Oldman (Rush) is managing director of a leading auction house. He is a man with his own individual style who regularly dyes his hair, never goes out without his finest leather gloves and tries to reveal as little as possible of his emotional world. In a secret hall inside the villa in which he lives alone, he has collected hundreds of masterful, priceless paintings from many different eras. He has succeeded in acquiring these paintings, all of them portraits of women, during his own auctions with the help of his old friend Billy. One day, Oldman receives a special assignment: a mysterious young woman, who refuses to appear in person, asks him to sell her family’s antiques. But Oldman is not only interested in the classical painting, furniture and material on offer. He becomes increasingly fascinated by the mysterious incognito woman, who will only communicate with him from behind thick walls and heavy doors." (Berlin Film Festival)

The very things that make The Best Offer such a sublime delight are also the same things that would cripple its narrative if closely scrutinised. This Hitchcock homage, written and directed by Giuseppe Tornatore (of Cinema Paradiso fame), is a creepy, weird, captivating, endearingly awkward concoction, a precious thing of gimmicky preposterousness that one can imagine Brian De Palma going to town with.

Art world thriller with shades of "Hugo" should be a creatively winning combination... yet beneath the varnish lies a work crying out for proper subtext.

A stunning performance by Geoffrey Rush elevates this beguiling tale that explores authenticity and all its priceless facets.

A tenuous art-scam/romance/thriller storyline is fatally undermined by rusty dialogue.

An astutely written return to English-language genre film, where his Baroque excesses get worked into the plot.