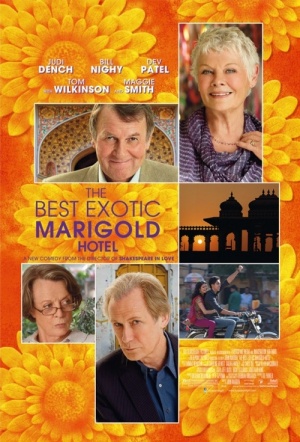 Bittersweet comedy starring British acting royalty Judi Dench, Maggie Smith, Bill Nighy and Tom Wilkinson as a group of English pensioners who uproot and retire to the seemingly luxurious Marigold Hotel resort in India. From the director of Shakespeare in Love.

On arrival in Jaipur they find not a romantic idyll (as promised by enticing advertisements), but a dusty, run-down shell of the Marigold's former self. Encouraged by the hotel's over-optimistic young manager (Dev Patel, Slumdog Millionaire) and the beauty of India, the group of retirees tentatively embark on a new adventure...

Chasing dreams, embracing change and quoting Kipling are some of the elements of this funny, bittersweet and uplifting tale set against a chaotic, colourful backdrop in India.

The pleasure of seeing a supergroup of Brit-veterans soon withers in an OAP comedy that plumps for light laughs over deeper insights.

Provided they don't mind being patronised and stereotyped by a shallow but not wholly untruthful film, then the target audience will be satisfied.

Not exactly concerned to do away with condescending stereotypes about old people, or Indian people of any age. It's a film which looks as if it has been conceived to be shown on a continuous loop in a Post Office queue.

Charming, delightful and amusing - just what you'd expect from the star-studded cast of veterans.