Taking us back to 1927, The Artist picks up with silent screen legend George Valentin (Jean Dujardin). Seemingly at the height of his career, George is hot property. Whilst posing for pictures at the premier of his latest picture A Russian Affair the married Valentin meets a beautiful young fan named Peppy Miller (Berenice Bejo). The meeting is photographed and scandalised on all the front pages, a curious public all wanting to know "who is that girl? Buoyed by the inquisitive adoration she is getting, Peppy decides to audition as an actress in George's next film. With the advent of the Talkie, Peppy's star is on the rise whilst the once powerful silent star, George, finds himself and his talents unneeded by a hungry film going public.

I'm besotted with this film. In a time where it's all about who can talk the loudest without saying much at all, The Artist says everything by saying nothing at all. The creation in all its splendid glory is that of writer/director Michel Hazanavicius. With no prior knowledge of Michel's work, I can categorically say that I'm a huge fan and will follow his next move with great anticipation. The novelty of The Artist's silence aside, the film's richly fulfilling story is only topped by the astonishing performances from Jean Dujardin & Berenice Bejo. Both actors were asked to work in an art form that died out long ago, no easy feat I'd imagine. Though, for the professionals they are, this was clearly no obstacle. Their performances were truly spellbinding. It should also be noted that the dramatic & comedic queues of Jean & Berenice could only be reached by the addition of Ludovic Bource's beautifully tempered and exceptional score.
0 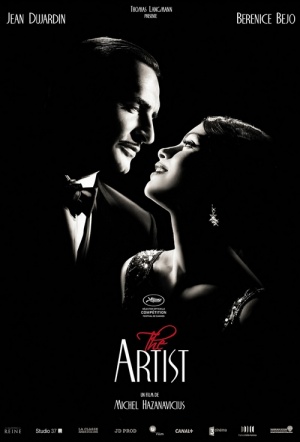