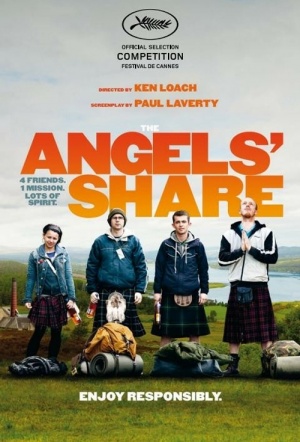 Ken Loach (Looking for Eric) comedy about a Scottish man with a dark history who vows to change his ways when he's introduced to fatherhood. A visit to a whisky distillery inspires him and his mates to seek a way out of their dead-end lives.

"Robbie, a Glasgow boy locked in a family feud, just wants a way out. When he sneaks into the maternity hospital to visit his young girlfriend Leonie and hold his newborn son Luke for the first time, he is overwhelmed. He swears that Luke will not lead the same stricken life he has led.

"On community service Robbie meets Rhino, Albert and Mo for whom, like him, work is little more than a distant dream. Little did Robbie imagine that turning to drink might change their lives - not cheap fortified wine, but the best malt whiskies in the world. His newly discovered talent - a fine palate and a delicate 'nose' - leads Robbie and his crew to the strange world of fresh air and open spaces, the Scottish Highlands, and the biggest gamble of their lives." (Cannes Film Festival)

Like a subtly blended malt, this mixes light and dark to create one of Loach’s most life-affirming tales. Funny, frank and it won’t give you a splitting hangover.

While other Loach films have focused on the realities of such lives, this one does so to a more limited extent, allowing upbeat storytelling to transport its characters to another, hopefully better place...

A few clumsy touches do not seriously diminish the charm of a film that is ultimately a heart-warming celebration of kindness, friendship and forgiveness.

Like good whisky, Loach is mellowing and becoming subtler with age — though a swift chug still has a bit of a kick.