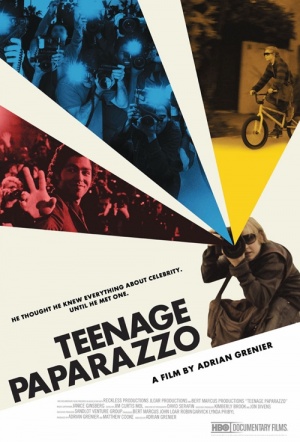 “Adrian Grenier gets it. He’s famous for playing a famous guy, a fictional movie star named Vincent Chase on the series Entourage. In the documentary Teenage Paparazzo, directed by Grenier, he begins by following a 12-year-old paparazzi photographer named Austin Visschedyk. The film unexpectedly becomes a clear-eyed investigation of the fame apparatus as Visschedyk becomes a mini-celebrity in his own right, in part because of his association with Grenier.

"As a filmmaker, Grenier talks to various intellectuals – an anthropologist, a media theorist and a film historian – as well as such celebrities as Matt Damon, Rosie O’Donnell, Eva Longoria Parker, Lindsay Lohan and comedian Lewis Black, and visits the offices of a glossy supermarket tabloid magazine. He even goes on a staged date with Paris Hilton to see how it gets reported in the press… Grenier understands the distinction between who he is and who he plays on TV and uses the slippage between the two to wedge himself into the cracks of the machinery of fame and the media.” (New Zealand International Film Festival)

Teenage Paparazzo is an insider's view of the ultimate insider's town.