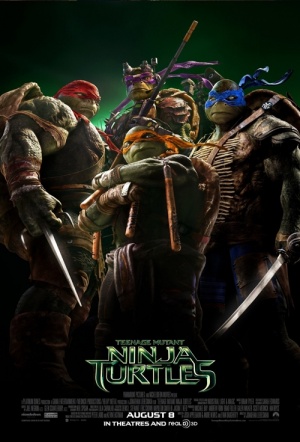 Starting life as a comic book, the four sewer-dwelling anthropomorphic turtles named after Renaissance artists have appeared as a toy range, four live action movies in the '90s, and multiple animated TV series. This is their reboot, with Megan Fox as hottie reporter April O'Neil and Michael Bay (Transformers) serving as executive producer. The turtles are brought to life by motion-capture CGI.

Darkness has settled over New York City as the diabolical Shredder and his Foot Clan hold an iron grip on the police and politicians. Frustrated reporter O'Neil, trying to break out of the news-lite mode she's been stuck in, does her best to expose the Foot Clan. Little does O'Neil know she's on the verge of making an even bigger discovery when four mutant heroes take on the Clan during their first streetside mission.

Take a look at Jonathan Liebesman's filmography - Wrath of the Titans, The Texas Chainsaw Massacre: The Beginning - and ask yourself, how does this guy keep getting handed the keys to giant franchises? His effort to revive Teenage Mutant Ninja Turtles for the umpteenth time is dead on arrival, a ghost of previous incarnations puffed up with cringeworthy modern 'tude.

Neither a particularly good movie nor the pop-cultural travesty that some were dreading.

This is as generic as Hollywood gets.

Attached to this movie, the title no longer sounds zany; it looks like a series of keywords.

A reminder that we should keep our guard up when we suspect creative choices coming from the stockholders' perspective.

It’s afraid of being too fun or too light, and doesn’t seem to know whether it wants to be a Nolan film or a 21 Jump Street-style spoof.