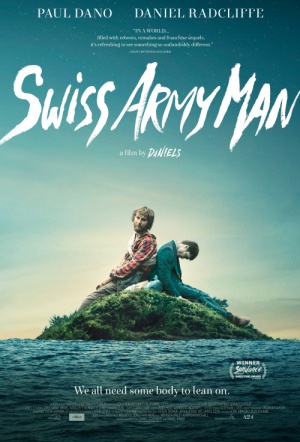 "Alone on a tiny deserted island, Hank has given up all hope of ever making it home again. But one day everything changes when a dead body washes ashore, and he soon realises it may be his last opportunity to escape certain death. Armed with his new 'friend' and an unusual bag of tricks, the duo go on an epic adventure to bring Hank back to the woman of his dreams.

"Music video gurus The Daniels, a.k.a. Daniel Scheinert and Daniel Kwan, craft a wholly original debut feature bursting with limitless creativity both in content and form. Their consistently surprising script spans a wide range of emotions: from the ridiculously absurd to a touching exploration of what it means to be human." (Sundance Film Festival)

This movie wears its weirdness as a badge of honor - as well it should.

A ridiculously infantile film, one that flatters itself by intimating a deeper comment about suppressed masculinity or romantic passivity.

Isn’t for everyone. But the story is astoundingly original.

It's coarse and it's stupid, but it is, thanks mostly the two good performances and some stylish use of music and editing, a little bit moving.

A kind of Weekend at Bernie's meets Warm Bodies by way of Cast Away...

There are times when this mindbending bromance actually achieves a twisted tenderness. There are also times when you'd like to ride Manny's farts to the nearest exit. It's your call.

By turns, enchanting, irritating, juvenile and yet oddly endearing ...