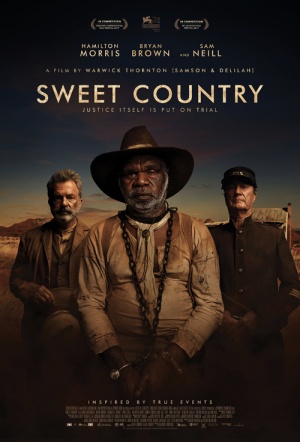 Sam and his wife are pursued across the outback. Sergeant Fletcher (Brown) leads the posse with the help of tracker Archie (Gibson John) and local landowners Fred Smith (Neill) and Mick Kennedy (Thomas M. Wright). Fletcher is desperate to capture Sam and put him on trial for murder, but Sam is an expert bushman and has little difficulty outlasting them. Eventually, for the health of his pregnant wife, Sam decides to give himself up and is put on trial in the courtroom of Judge Taylor (Matt Day).

Director Warwick Thornton’s outback morality tale, Sweet Country, combines exquisite visuals of Australian landscapes with a script that dabbles as much in mythical justice as deeply specific ideas of what this country is made of. With superbly crafted performances, Sweet Country is an essential Australian Western.

At times exploiting the Western genre’s conventions and at others gently subverting them, Warwick Thornton’s Sweet Country takes place a while after typical horseback foundational myths. The film’s 1929 Australian Outback setting is as lawless, violent and transitional as any, however, and serves as a potent backdrop to an often searing portrayal of colonial racism and rage at a time when today’s cultural paradigm coalesced - a continent ruled by arrogant invaders, who’ve dispossessed the indigenous people’s connection to culture and country.

Australia now has its High Noon.

Old Testament cinema, with an almost biblical starkness in its cruelty and mysterious beauty, set in a burning plain where it looks as if the sun-bleached jawbone of an ass could at any moment be picked up and used as a murder weapon.

One of the most memorable cinematic outings you'll have in 2018.

A quietly blistering portrait of prejudice.

Complete with its hammering home of politics - one character's final comments are "What is this country coming to?" isn't quite as powerful as it could - and should - be.

A drama of imposing breadth and emotional depth.

A film that will inspire audiences with a feeling of righteous fury and national pride. Must see!

It's the indigenous cast, many of them non actors, who take the film to another level.