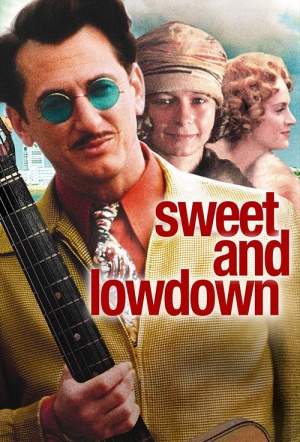 Sean Penn and Samantha Morton star in this comedic biopic from Woody Allen, focused on the life of fictional jazz guitarist Emmett Ray. Both Penn and Morton earned Oscar nominations for their roles.

Emmet Ray (Penn), according to himself, was the greatest New York jazz guitarist of the 1920s and 1930s. Although Ray certainly had skill and a signature style, those who knew Ray best admit that perhaps he was best known in his extra-musical roles - as a pimp and a kleptomaniac whose fatal flaws hung over his career like a black cloud.

Penn gives a winning performance as the brash, mostly unlikable Ray, who is redeemed only by the beautiful music he makes.

Like many of Allen's best films, this is a deceptively modest affair, funny and charming but seemingly slight and inconsequential - until the killer coda.

This is one very tuneful labour of love.

It's entertaining, and his fan-base will enjoy it, but for the first time, it looks as if Woody Allen is beginning to treat us with something approaching negligence.

Emmet Ray is a fictional character, but so convincing in Woody Allen's Sweet and Lowdown that he seems like a real chapter of jazz history we somehow overlooked.

Fantastic performances from Penn and Morton ignite this bittersweet comedy.