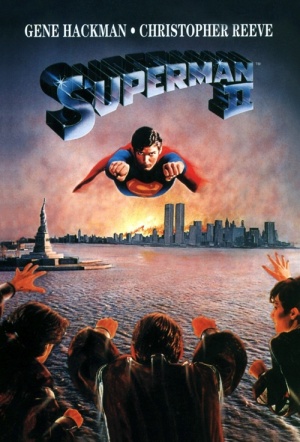 Sequel to 1978’s Superman with Christopher Reeve, Gene Hackman and Margot Kidder returning. Superman relinquishes his powers at the Fortress of Solitude to permanently become Clark Kent and marry Lois Lane. Meanwhile three Kryptonian criminals (including Terence Stamp as General Zod) who were banished to space before their home planet was destroyed, have found their way to earth with intentions to conquer.

Director Richard Donner – hired initially to shoot part one and two back to back – had bad blood with the producers and was taken off half way through Superman II. He was replaced by Richard Lester who reshot most of Donner’s work and injected a more jokey, comic book tone. A Richard Donner director’s cut was released in 2006.